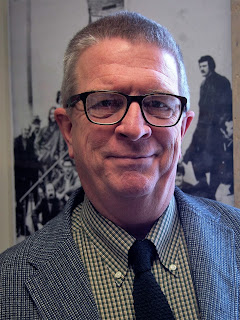 Richard Robbins will read from his new book Body Turn to Rain: New & Selected Poems (Lynx House Press) at the upcoming Big Tent Reading Series, with Nino Cipri and Celeste Gainey--7 pm, 7th & Mass. Robbins's poems combine narrative with images to create surprise, as in this poem "Old Country Portraits." It appears to be a still life, suggesting a Vermeer portrait, a “lost sister” performing a trick on the family by snapping away the table cloth. The final trickery is the subtle interplay between the living and the dead.
Old Country Portraits by Richard Robbins © 2017
My lost sister used to try the trick
with the tablecloth, waiting until
the wine had been poured, the gravy boat filled, 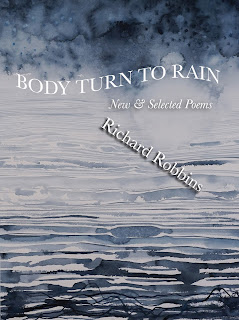 before snapping the linen her way

smug as a matador, staring down
silver and crystal that would dare move,
paying no mind to the ancestor gloom
gliding across the wallpaper like clouds

of a disapproving front—no hutch
or bureau spared, no lost sister sure
the trick would work this time, all those she loved
in another room, nibbling saltines,

or in the kitchen plating the last
of the roast beef. How amazed they would be
to be called to the mahogany room
for supper, to find something missing,

something beautiful, finally, they could
never explain, the wine twittering
in its half-globes, candles aflutter, each
thing in its place, or so it seemed then,

even though their lives had changed for good.
#
William Trowbridge writes of Robbins’ new collection: "The poems are grounded in the geography of the American west-iots seasons, its people, its destruction-and lifted by the music Robbins coaxes out of the language. They reveal a sympathy with nature and a passion for humane awareness in a culture which often seems to tell us merely to consume and, ‘Be happy you know nothing.’"
#


Richard Robbins was born in Los Angeles and grew up in Southern California and Montana. He studied as an undergraduate with Glover Davis and Carolyn Forché at San Diego State University and as a graduate student with Richard Hugo, Madeline DeFrees, Tess Gallagher, and William Pitt Root at the University of Montana. He has published five full-length books: The Invisible Wedding was published in 1984 by the University of Missouri Press as part of its Breakthrough Series, Famous Persons We Have Known in 2000 by Eastern Washington University Press, and The Untested Hand in 2008 by The Backwaters Press. Radioactive City won the Bellday Prize and was published in 2009 by Bellday Books. Other Americas was released in 2010 by Blueroad Press. His Body Turn to Rain: New & Selected Poems is new in 2017.  Over the years, he's received awards and fellowships from The Loft, the McKnight Foundation, the Minnesota State Arts Board, the Hawthornden Castle International Retreat for Writers, the National Endowment for the Arts, and the Poetry Society of America. From 1986-2014, Robbins directed the Good Thunder Reading Series at Minnesota State University Mankato, where he continues to direct the creative writing program. In 2006, he was awarded the Kay Sexton Award for long-standing dedication and outstanding work in fostering books, reading and literary activity in Minnesota. http://faculty.mnsu.edu/richardrobbins/
Posted by Denise Low at 12:57 PM