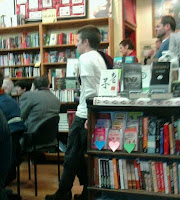 Stanley Lombardo continues to publish readable translations of classical literature. His Iliad and Odyssey are vivid translations that emphasize dramatic storytelling. Ronald Myers descrbes his translation style as “minimalist and colloquial.” As a translator, Lombardo becomes the element of Mercury—a perfect catalyst who transforms one language to another, without drawing attention to himself. He returns these works to performance origins.

Lombardo performed selections from Dante’s Inferno at the Raven Bookstore (www.ravenbookstore.com ) Feb. 12 to a packed house. No one made a sound for the hour-long presentation, and the corner street musician’s saxophone was distant accompaniment. Lombardo punctuated the reading with a hand drum for ending points—unobtrusive emphasis. Also, he kept an almost subliminal beat as he voiced the lines. He spoke the beginnings in Italian, and then switched to English.

Here, from the net, is his opening:

Midway through the journey of our life
I found myself within a dark wood,
for the straight way had now been lost.
Ah, how hard it is to describe that wood,
a wilderness so gnarled and rough
the very thought of it brings back my fear.
Death itself is hardly more bitter;
but to tell of the good that I found there
I will speak of the other things I saw.

I cannot say just how I entered that wood,
so full of sleep was I at the point
when I abandoned the road that runs true.
But when I reached the foot of a hill
That rose up at the end of the valley
Where fear had pierced me through to the heart,
I lifted my eyes and saw its shoulders
already bathed in the light of that planet
that leads us straight along every path.
This calmed a little the lake of my heart
that had surged with terror all through the night
that I had just spent so piteously.