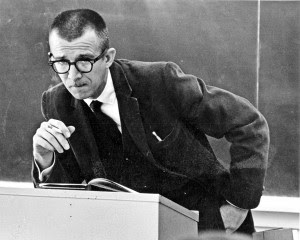 I first met RP when he was a visiting writer at Wichita State University, early 1980s, through G. Barnes,a great promoter of the arts. He said I had to meet this guy, and we found him at an after-class party at a student's apartment. He was fun, witty, smart, and happy. I wanted to be like him, so I continued to read poetry.

He also read at the University of Kansas at the same time, and it was memorable. He discussed the works of Richard Hugo and his recent death. He read a delightful found poem from a camping catalogue about the pleasures of zipping together sleeping bags. Not long after, I attended my first Associated Writers and Writing Programs (AWP) conference, and over the years of those reading-eating-chatting-dancing fests, I joined Dinners with Dana. Usually I would fast and save my per diem for the one ultimate meal at a restaurant he pre-selected. He was a personage, and I have warm memories of him from our meetings. He was generous and threw great parties for his AWP friends. Wife Peg's parents live in Lawrence, so I had the chance to meet them occasionally at the Eldridge for drinks. These are cherished memories.

Most of all, though, when I heard he had died, I regretted he will write no more poetry. My first thought was this loss.

I'll reprint part of a review I wrote about his 2004 book The Morning of the Red Admirals (Anahinga Press), to illustrate my appreciation for his work (the full review is at http://www.kcstar.com/ ):


"Robert Dana’s fifteenth book of poems is iconoclastic. “Part of the poet’s task was to break the rules of language, to free it from the burdens of its history, thus acknowledging that history and revivifying it,” he writes in Ploughshares (1991). That paradox lies at the heart of his own poetics. He chooses words with full awareness of their etymology and then realigns them into present-time currency. He procreates poems with fossilized words, as in “Garden Fable”:
Aristoxenus, the Hedonist,
watered his lettuce with wine
and honey, knowing the difference
between nothing and something
is not just something, but some-
thing special . . . . (19)
The transformation of the commonplace into ecstatic, koan moments of understanding— “something special”—through word spells is the gift of this poet. How wonderful to revive the name of this nearly forgotten Greek author who wrote about excesses of Persian kings (in Bíos Archyta). Dana goes on to include related classical words such as “conundrum” and “sluicing,” alongside Anglo-Saxon, fist-like words like “sodden,” “gutters,” “scrape,” “pelts” and “drays.” And perhaps this mixture of measured Latinate terms amongst the workaday old English is what makes another level of paradox in American English poetics, the tension between the civilized and the blunt. Finally, after the word duels, at the end of the poem we are in Iowa, the storm vanished, the sun forming a “sheen.” All poems resolve in transformed solids of this world."
Posted by Denise Low at 9:20 AM