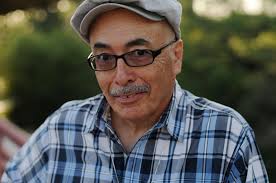 Juan Felipe Herrera was born in Fowler, California in 1948. He is the author of 28 books of poetry, novels for young adults, and collections for children, including “Half the World in Light: New and Selected Poems" (2008), winner of National Book Critics Circle Award and the International Latino Book Award. His other honors include fellowships from the Guggenheim Foundation and the National Endowment for the Arts, two Latino Hall of Fame Poetry Awards, and a PEN / Beyond Margins Award. Elected a Chancellor for the Academy of American Poets in 2011, Herrera served as the Poet Laureate of California from 2012-2015.
Herrera, the 21st Poet Laureate, will take up his duties in the fall, opening Hispanic Heritage Month at the Library with a reading of his work at the Coolidge Auditorium on Tuesday, September 15th.
Posted by Denise Low at 10:09 AM