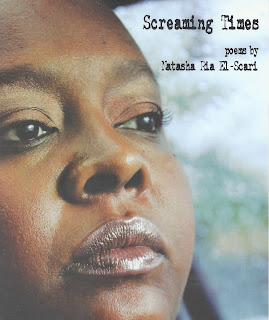 "Screaming Times: Poems by Natasha Ria El-Scari is the newest book in the monthly POP Poetry book series. Its verse illustrates the vibrancy of this community project. The POP Poetry series, sponsored by Prospero’s Books on West 39th Street, highlights one poet each month by holding debut readings at the store and supporting Spartan Press, which publishes the collections. Jason Ryberg, an editor at Spartan Press, says, “Kansas City is known for its music and art scenes. We bring attention to the writing scene.” Other editors are Will Leathem, who co-owns Prospero’s Books, and Stephanie Powers. El-Scari, a native of Kansas City, uses a consistent, strong voice throughout the poems in “Screaming Times.” Poems lift off the page, almost reading themselves. Unlike some performance poetry, her words translate well to the printed page. . . ."  See more at the KC Star website until 11/5/2015.
Natasha Ria El-Scari is a writer, Cave Canem fellow, and educator for over a decade. Her poetry, academic papers, and personal essays have been published in anthologies, literary and online journals.  She has opened for and introduced many great writers, singers and activists, and has been featured at a host of universities and venues nationwide. Born and raised in Kansas City, Missouri, Natasha has a BA from Jackson State University and a MA from the University of Missouri-Kansas City. Natasha’s Black Feminist approach is reflected in her writing, poetry and performance pieces. Natasha brings the fire! She is a divorced mother of two awesome children. Once asked in an interview what makes her unique she replied, “…most people lie to themselves, but I like to reveal myself.”


Read more here: http://www.kansascity.com/entertainment/books/article39302358.html#storylink=cpy
Posted by Denise Low at 9:23 AM