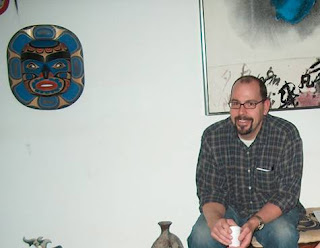 Feb. 1, the Raven Bookstore and the Lawrence Arts Center sponsored a reception to honor winners of the Langston Hughes literary prizes. Jean Grant won fiction, and Doug Crawford-Parker won poetry. This 11-year-old contest carries the name of the famous Lawrence and Harlem Renaissance poet who grew up in Lawrence.

I was honored to introduce Doug at this event. I had heard of him years ago when he was a McNair Scholars tutor who helped one of my former Haskell students as she prepared for a college teaching career. And he and I have crossed paths through the years, as we do in smaller communities. He had gone to Wichita State University several years after I did, where he studied with Albert Goldbarth and Janet Sylvester. He and I were in a non-fiction prose writing group, Stranger Than Fiction, 8-10 years ago, until most the members moved--a downside to college towns. And now he frequents my coffee shop, La Prima Tazza, where I have seen him studying for comps, drafting his dissertation, and apparently also writing poetry. The judging for the LH contest is blind, and I had no idea this was his work.

I'm reprinting a few poems here. Doug has not published much, but now that his English doctorate is in hand, he will have time for more poetry. He adjuncts in the KU English dept. They are lucky to have him. Photo by Denise Low

“GRILL” (A)
By Doug Crawford-Parker

The smells that swirl up, sizzling out of the kitchen
and into the bar, sounding out sandwiches
past the TV rumbling the news, the stubbled men,
some pink, some burnt, days inside or out,
hands full from days spent moving, lifting,
grabbing, the glasses sliding small foam
along their thick bottoms as evening brings forth
its low-angled dusk.

“GRILL” (B)
By Doug Crawford-Parker

Ask me. Ask me, without fail, where I was,
when I was, how I was, what I did when
I was where. Ceaselessly. Repeatedly. Let go
of assumptions, hold tight to desire, hope
of knowing, uncovering what once was in
darkness, occluded. Tirelessly wonder. Put
me under the lights to discover all
that I hide only from myself.

LANGUAGE (B)
By Doug Crawford-Parker

Latin lends us words like transportation,
words which carry us across and bear
meaning. They allow us to move
across land and sea, inside our vehicles
(literally carried by them), wheeled or keeled.
They convey (com- jointly + via way) to us
what we might know, what we
could carry along, what can carry
us to each other as we transfer,
transmit, or transition from one
place or idea to another, as we
place those items in the cart
that will carry us and all
we mean to each other.