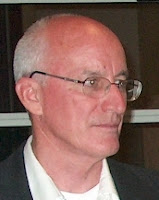 At one of the 1990s Associated Writers & Writing Programs conferences I discovered writers who studied under Richard Hugo and Madeline Defrees at the University of Montana. They told the best stories. Then I realized fellow Kansan Michael Poage was one of this group, and he received his MFA in the 1970s. Indeed, he dedicates this book to Hugo and Defrees. He continues the tradition of lyricism joined with narrative in equal parts. This is his most plainspoken book, less concerned with structure than topics. Previous books were syntax macrame with striking images. This book makes first impact with story. His sequences are not always logical, which adds mystery to the work, as in this poem:

Today it is important
to visit the sun.
That means going out of this room
and perhaps seeking people. Then
I will have to make a decision.
Do I cross the street
or face whoever comes
along? Today, in the kitchen,
I heard on the radio
that Voyager 1--originally sent
out by themselves in all that color--
is moving at 39,000 miles per hour
away from us, perhaps toward some other life.
It has a Motown record with it and now
has gone farther than any other object
sent from earth. I feel like that--
I feel like I am between lives
and hope to be
in my new one soon.

Poage's work in this volume is more journal like--the world around him is as surreal as anything he could construe. The juxtaposition of the Motown record and space travel is as unlikely as the narrator's various identities. This poem is one means of space travel. Previous books by Poage are Abundance (213 Press), BORN and Handbook of Ornament (Black Stone Press), The Gospel of Mary (Woodley Press) and god won't overlook us (Penthe Press).