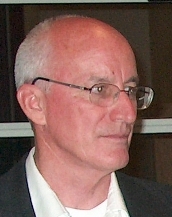 We thought it was snow
In the air but it was ash
Falling as the olive trees
Burned. Then the soldiers
Standing along the fence,
Like teenagers shy at a dance,
Talked and smoked and
Boasted of turning back the
Silent protest against the
Five hundred year old trees
And fifty life-times of death
By fire and a storm of tears
And angered swollen
Hearts. So we grabbed
Hold of the arms from
The other as the swing came
To us knowing there would
Be no safety net if we fell.
Michael Poage teachers for the Intensive English Language Institute at Wichita State University. His MFA is from the University of Montana, where he studied during the time of Richard Hugo and Madeline DeFrees. His Master of Divinity degree is from San Francisco Theological Seminary. For the past 40-plus years he has written and given readings in several states as well as in Mexico, Latvia, and Bosnia & Herzegovina.  He has traveled and worked in Mexico, much of northern and southeastern Europe, and the Middle East.  He was part of the Gaza Freedom March in Cairo in 2009, went to the West Bank in 2010, and traveled to the Gaza Strip with Physicians for Social Responsibility in April, 2012 working as a trauma counselor.  He lives in Wichita. Reprint of this poem is with his permission. See www.michaelpoage.com for books of poetry, more poems, and career and contact information.