These are my comments for the 18th Langston Hughes Contest Awards Ceremony, Feb. 1, 2014, sponsored by the Raven Bookstore and the Lawrence Arts Center, © by Denise Low. Contest winners are Crystal Boson and Justin Runge 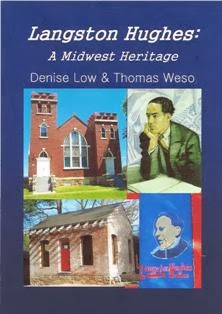 The Langston family members are a link to the abolitionist past of Lawrence. They resided in the area from 1870 to 1915—45 years. They embodied the struggles of the the war against slavery. Langston Hughes’s grandmother Mary Sampson Patterson, who attended Oberlin College, first married Lewis Sheridan. He was killed with John Brown at Harper’s Ferry. She kept Sheridan’s blood-stained shawl and later wrapped grandson Langston Hughes in it, as he describes in The Big Sea. In 1869 Mary married Charles Langston, a hero of the Oberlin-Wellington Rescue. They lived at Lakeview from 1870 to 1886 , ten miles northwest of Lawrence on an oxbow of the Kansas River, where his 120-acre farm was described as one of the best apple orchards of the state and “all inclosed and all under construction except 30 acres of timber land. He has a comfortable residence and good farm buildings” (A.T. Andreas Vol. 1, 350). Langston Hughes’s great-grandmother Johanna Sampson lived in Lakeview with the family also (1880 census). Charles Langston had a foster son, Desalines Langston, who lived with the couple until adulthood.
In 1886 the household moved to a city block at 7th and Alabama Street (Lawrence City Directory 1886). By then Charles and Mary had two children, Nathaniel and Caroline (born in 1873), who would become Langston’s mother. On Alabama, Hughes owned several houses and a large lot.  Grown son Desalines resided at 726 Alabama, (City Directory), and the current building may be original. Langston Hughes grew up at 732 Alabama, in a house torn down in the 1960s. A house identical to the one at 732 Alabama remains next door at 736 Alabama, restored by Ian Hurst. Charles continued to farm or lease his Lakeview holdings, and he was a partner in the Burns Grocery at 820 Massachusetts Street until his death in 1892. He is buried in the Lawrence cemetery, along with his wife, Desalines, and other family members. He was active in the nearby Baptist Church and the local newspapers. He also was a member of an African American fraternal organization in the 8th and New Hampshire building. Charles and Mary were active, respected members of the Lawrence community.

Caroline, or Carrie, Langston married James Hughes in about 1900, lost a child, then had Langston in 1902 in Joplin, Missouri, about a hundred miles from Lawrence. Grandmother Mary was residing with them. Almost immediately the couple separated—the Lawrence City Directory shows Carrie Hughes at 732 Alabama in 1902, in the city directory copyrighted that year. Through the years, Langston Hughes spent most of the time with his grandmother, but sometimes lived with his mother wherever she found work. Nonetheless, Rampersad affirms, “Here, in almost the exact center of the continental United States, Hughes would pass most of the first 13 years of his life” (Rampersad 5). He refers to Lawrence, 1902 to 1915. After the death of his grandmother in 1915, Hughes went to live with family friends, James and Mary Reed, 731 New York Street. He attended Pinckney School, New York School, and the city junior high that was at 9th and Tennessee—now an office building. He and his mother read books from the Lawrence Public Library, the Carnegie building. He saw vaudeville and silent movies at Liberty Hall Opera House, although restricted to the balcony. He found piece work with the Barteldes Seed Company, on New Hampshire Street. He attended St. Luke’s AME Church, which he writes about in his autobiography. He attended events at the Ninth Street Baptist Church. Much of the Lawrence that Hughes knew still exists. His grandparents, Desalines, and other family members are buried in the Lawrence cemetery.
Lawrence was at a crossroads, on the train lines that brought traveling musicians and actors, so he had a rich cultural background—from school, church, downtown entertainment, and the African American business community on Vermont Street. He was prepared to excel by the time he followed his mother to Illinois, Cleveland, Washington, D.C. and beyond. In the 1920s he became well known as a central figure in the Harlem Renaissance.
Hughes was a prolific genius. He first published in The Crisis in 1921, "The Negro Speaks of Rivers", which became Hughes's signature poem, was collected in his first book of poetry. Vachel Lindsay recognized his talent and facilitated his first book The Weary Blues (1926), the first African American book of poetry from a mainstream publisher, Knopf. Hughes's life and work were enormously influential during the Harlem Renaissance of the 1920s, alongside those of his contemporaries, Zora Neale Hurston, Wallace Thurman, Claude McKay, Countee Cullen, Richard Bruce Nugent, and 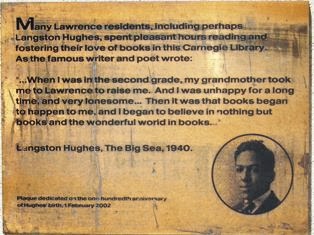 Aaron Douglas.
In all, Hughes published eleven books of fiction—in 1930, his first novel, Not Without Laughter, won the Harmon Gold Medal for literature. He wrote twelve major plays; sixteen books of poetry; eight books for children, and six nonfiction books, including autobiographies The Big Sea and I Wonder as I Wander. He translated works of literature into English. His journalism includes writing for the Baltimore Afro-American and other various African-American newspapers during the Spanish Civil War. In the 1940s, he wrote a column for the Chicago Defender—the Jesse B. Semple stories. Hughes was the first black American to earn his living from writing and lectures.
Hughes was not always a popular writer with the critics. He wrote about social realities and racism, not prettified. His audience was the African American public. In "The Negro Artist and the Racial Mountain" he asserts “If white people are pleased we are glad. If they are not, / it doesn't matter. We know we are beautiful. And ugly, too. “ The poem continues, “If colored people / are pleased we are glad. If they are not, their displeasure / doesn't matter either. . . .” The poem concludes with the idea of being “free within ourselves.” Hughes traveled widely and had a global influence, including the “Negritude” movement in France and influence on African poets Léopold Sédar Senghor and Aimé Césaire.
During the 100th anniversary of Hughes’s birth celebration in Lawrence, Alice Walker spoke about a less known accomplishment of Hughes—he mentored her and many others. Others who attended and spoke about his influence were Amira Baraka, Ruby Dee, Ossie Davis, Billy Joe Harris, Danny Glover, Sonia Sanchez, and many others who came to Hughes’s hometown to honor him. At that time one of the organizers, Maryemma Graham, a Kansas University professor, said this about Hughes:
“He wrote jazz poems and he created gospel plays. These are forms that we now recognize but we don’t really think of them in relationship to the originator, the innovator that Hughes was. What we call vernacular poetry or spoken word art or hip hop – that’s Langston Hughes”   (Radio Interview KANU, 10 July 2001)”
Langston Hughes and his family lived in Lawrence for generations and their legacy continues to influence on Lawrence. Our celebration of him continues the abolitionist tradition of this town, which was founded to oppose legal slavery. Literature is a strong force in the continuing struggle for equity.
Posted by Denise Low at 11:06 AM